A block north of 1081 Carling
on sunny mornings in December:
this is about the brightest it will get
Artist’s conception — view from Hamilton Ave. South at Inglewood

Taggart Realty presented its revised application to redevelop 1081 Carling Ave. to CHNA’s 1081 Carling subcommittee Sept. 6 and the City’s Urban Design Review Panel (UDRP) Sept. 9. Both say the revised proposal still lacks height transition from surrounding homes and is too large for the site. It cuts 3 storeys from the east tower and 6 storeys from the west one. But the height still exceeds the 45-degree angular plane (or 11 storeys for this site) required by the City's highrise guidelines.

The UDRP, made up of three architects, provided a peer review of Taggart’s proposed revised plan, and all found that the towers lack adequate transition to the neighbourhood. The site is suitable for a single tower, rather than two towers, they said. The UDRP will release its full recommendation soon. The UDRP provides their comments on development proposals to the City’s Planning Committee and City Council but does not make decisions. Taggart has not yet submitted its revised application and could change it further.

Stay involved! Learn about the issues (see What are the issues?, below) and tell Councillor Jeff Leiper how you feel (jeff@KitchissippiWard.ca).

Taggart Realty Management has applied to the City to build two residential towers at 1081 Carling Avenue at Parkdale. The proposed rezoning is a concern for nearby residents as well as for the broader Civic Hospital neighbourhood. The developer’s proposal for towers of 22 and 28 storeys would set a precedent for height and density of future developments along the Carling boundary of the neighbourhood from Island Park to the O-Train, including Old Irving Place, Bayswater, Fairmont, and Holland.

CHNA supports development in our community that respects the Official Plan and applicable guidelines. But this proposal for 1081 Carling is not consistent with the Official Plan in effect at the time of the proposal, or with the Urban High-rise Guidelines and Guidelines for Arterial Mainstreets. CHNA is asking for changes to Taggart’s proposal to allow intensification while respecting the community.
Taggart's Proposal to the City of Ottawa

What are the issues?

Select from the issues below to learn more about specific problems with Taggart’s proposal.
height, transition and density — incompatible with the character of the neighbourhood (read more)
The proposed towers far exceed the current zoning height restriction of 30 metres (9 storeys) for buildings fronting Carling Ave. and the maximum height of 11 metres (3 storeys) for the property within 20 metres abutting the next residentially zoned property.

The City’s Official Plan requires a gradual transition in the scale and density of planned buildings located next to lower-density neighbourhoods. The proposal is inconsistent with this policy. It is also inconsistent with a specific guideline for a 45-degree “angular plane” — a slant of increasing height — measured from relevant property lines. Rather, the proposal is for an abrupt change in height of 72 degrees, which is out of context for the neighbourhood.

The new buildings would have 462 units, a level of density that is incompatible with the neighbourhood. 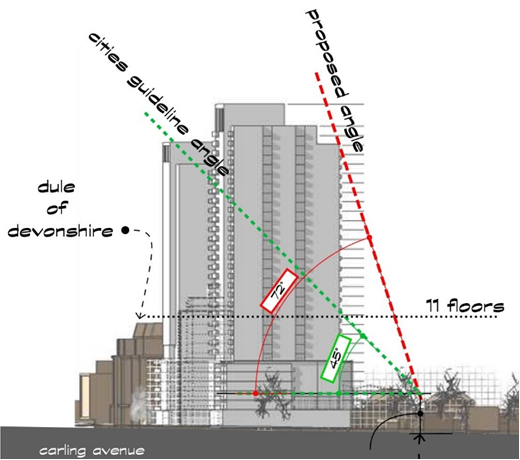 Traffic — Worsening an existing problem (read more)
Residents are aware of the longstanding problems resulting from poor traffic management on Parkdale Ave. This diagram shows how vehicles currently use side streets to travel from Carling and Holland to Parkdale at the Queensway.

Taggart has stated that traffic will be comparable to that currently being generated from the medical building/lots currently situated on the site, a statement that is not supported by evidence. In fact, adding 340 resident and visitor vehicles will further exacerbate the traffic problems in the neighbourhood. 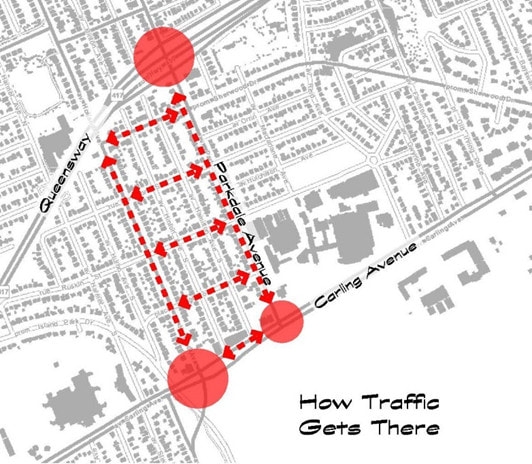 Of the 340 parking spaces described in the proposal, 47 would be visitor parking, which is inadequate and would add to heavy demand for street parking.

The proposal mentions light-rail transit, planned for Carling Avenue after 2031, as a way to handle the increased volume due to many developments along Carling. Even if the light rail system eases traffic congestion, it is at least a decade away.
The following are some of the ways that the increased traffic will affect the neighbourhood.

U-turns at Parkdale/Carling Ave. – The traffic consultant acknowledged that “a lot of U-turns” will occur at this intersection. This reality should not go unchallenged as any development that would encourage this unsafe practice would be irresponsible. Eastbound “circuitous routes” – The proposal requires vehicles to follow circuitous routes through single-lane residential neighbourhood streets, which will result in further cut-through traffic.

40% of the vehicles will be travelling eastbound when departing the proposed development. In order to travel eastbound, vehicles will need to follow 1 of 2 circuitous routes: Loading zone – The planned entrances to the two high-rise towers are located on Parkdale Ave. and Carling Ave. Loading zones for the two proposed high-rise towers (462 units with 750 to 1000 residents) will be located on the north side of the towers. Truck access will be via an access located north side of the dead-end structure on Hamilton Ave. South. This access will be used for garbage pick-up, delivery, moving and maintenance trucks, etc.

Traffic impact of other nearby developments

The Traffic Impact Assessment does not take into account the traffic impact of major developments adjacent and nearby the site:
Heritage area — Incompatible with the area’s character (read more)
The proposed development site is on a segment of Carling Ave. across from the Central Experimental Farm, a National Historic Site of Canada, which is also identified as a green space in the Official Plan.

The City’s Heritage Register shows that the adjacent neighbourhood (Civic Hospital Neighbourhood) is dotted with heritage buildings from the 1930s and 1940s, most built by architect David Younghusband (1883–1965). The Urban High-rise Guidelines (section 1.19) state that the development of a high-rise building, including its placement and design, must respect and complement the scale, character, form and setting of on-site and adjacent heritage properties. The interface between a development project and this distinctive neighbourhood must be treated with respect and care, guided by the Standards and Guidelines for the Conservation of Historic Places in Canada. Standard 11 states “Conserve the heritage value and character-defining elements when creating any new additions to an historic place or any new related construction.”
An objective of the Urban Design Guidelines for development along arterial mainstreets is to “foster compatible development that will contribute to the recognized or planned character of the streets.” The proposed 22-storey and 28-storey high-rise towers are therefore out of scale with the developments across from the Central Experimental Farm.

Shadow impact — Puts homes in the dark (read more)
The proposal’s Sun & Shadow Study for the 22-storey and 28-storey high-rise towers show that the towers will cast significant shade over many of the low-rise residential properties abutting and north of the proposed development. The Sun & Shadow Study concludes that:
See Shadow study and Why so gloomy in the section on Images.

Green space — Inadequate to be meaningful (read more)
Taggart is proposing two outdoor spaces as part of the development: a public park in the northeast corner of the site along Parkdale Ave., next to an existing house, and a space at the southeast corner of the site adjacent to a possible future transit station. The proposed green space, being provided as a public parkland dedication, is an area equivalent to 10% of the proposed development site, resulting in a park area of 429 square metres.

While the proposed 429 square metre green space meets the minimum requirement for a 10% green space dedication, this space is too small to accommodate the 750 to 1000 new residents who will occupy the 462 units in the proposed two high-rise towers. Furthermore, this park does nothing to facilitate an attractive, safe, and usable pedestrian connection with the community (3.6.3[4] of the Official Plan).

It is unclear how the open space at the southeast corner of the site will provide a “comfortable transition” and help provide an entry point to a transit station that will not be planned or built until after 2031. Since no studies have been conducted as to where stations will be placed or how the future transit station on Carling Ave. will operate, it is impossible to definitively know how the proposed public areas will fit with any future transit station.

What CHNA is doing

The purpose of 1081 Carling Avenue Sub Committee, established by Civic Hospital Neighbourhood Association, is to review, comment and develop a position on Taggart Realty Management's proposal for the 1081 Carling Avenue site development.
Subcommittee Terms of Reference
CHNA and residents respond to the proposal

CHNA hired a lawyer to help prepare an official response to the proposal, which was submitted to the City of Ottawa’s planner on November 1. Legal representation will also be needed in the future, as we represent CHNA’s views at various steps in the planning process. More than 50 residents also submitted responses — a high number of responses for our neighbourhood. Top issues for residents were the height of the towers, traffic, planning issues, scale and density of the project, and shading/privacy.

On October 20, 2021, CHNA representatives met with the developer, who gave no indication that they would modify the proposed plan for 1081 Carling Ave., despite broad community opposition to the development.

Your continued support is much appreciated, as this challenge will be a lengthy process.

Here are just a few ways you can help

If you are not a CHNA member but you would like CHNA to send you periodic updates on this issue, please sign up here.
Your information will not be shared with anyone.
To unsubscribe, please re-send this request with the correct email address and with the word “unsubscribe” in place of your first or last name.

Images of the effects of the proposed towers

<
>
Large shadows cast over the neighbourhood are one of the issues with the proposal. The diagrams shows shadows cast at 10 a.m. in July, September, November and December.
The video shows a perspective from street level. By late December, there are places north of the proposed high-rise towers where no morning light will reach the neighbouring houses. A screenshot taken from this video was used in the large image at the top of this page.
Diagrams show the current traffic problem, with vehicles using side streets to travel from Carling and Holland to Parkdale at the Queensway. Adding density and vehicles will worsen this problem.
The video shows the current building, the maximum development under current zoning, the proposed development, and an alternative development under current zoning.

You'll find all the latest information about this development on our 1081 Carling Ave Facebook page.